IT’S all about pipettes this week. Well, not all about them, but these workhorses of the laboratory have been figuring strongly in my consciousness.

One reason is that one of the early supporters of LabHomepage, Porvair Sciences, is making a generous offer to our readers – full details below.

The other reason is that I’m still chuckling over the embarrassment shown on the Integra stand at this week’s Scientific Laboratory Show in Nottingham, when we asked them why so many of the pipettes on display looked like the devices made by the company’s competitors.

The reason, of course, was that they were the devices made by their competitiors. It seems that, in a spirit of friendly rivalry, some shenanigans had taken place between the set-up of the exhibition hall on Tuesday and the opening of the show on Wednesday morning.

You can see the whole thing played out on our video report, embedded in the story at the top of this week’s top ten. It’s all good harmless fun and shows why many people, myself included, much prefer to attend these smaller exhibitions than the monster shows found in Germany and the USA. That’s not to say that I wouldn’t like to see a successful larger show here in the UK, but experience of recent attempts to create one must make this an unlikely development – at least while the general economy remains so troubled. 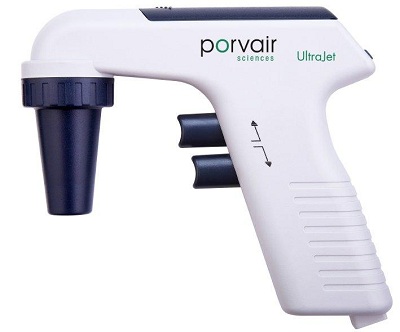 The compact Ultrajet pipette controller from Porvair Sciences is an easy-to-use electronic pipette filler. Ergonomically designed the Ultrajet is quick and simple to operate and can be used for extended periods of time without discomfort. Large buttons on the hand grip enable precise fine control of aspiration and dispensing of liquids. An integral LCD screen displays selected aspiration speed which can be simply set at a touch of a button. A removable neoprene nozzle, fitted with disposable filter, grips most standard lab pipettes firmly and efficiently allowing users to accurately transfer liquids into plates, vials or flasks.

All labs responding to this promotion before 31 May 2012 will receive a coupon entitling them to a free pack of 100 disposable serological pipettes (available in a range of volumes) if they order an Ultrajet pipette controller on or before 31st July 2012.

WE’RE just back from our visit to the Scientific Laboratory Show, and found that this smaller event on the laboratory exhibition circuit is every bit as appealing as the giant trade fairs found…

A PRODUCTIVITY increase of 100 times, or 10,000 percent, is enough to make any laboratory manager sit up and pay attention. This is exactly what is being claimed for…

3. Exploring particle physics through the medium of interpretive dance

THIS is one of those stories that makes you check the date on the press release, just in case it’s a spoof. As unlikely as it seems, though, this one is real: CERN…

4. Save on reagents with these low dead-volume reservoirs

A NEW 10ml disposable multichannel reagent reservoir from Integra has a dead volume of just 650ul, which the company says translates into a significant saving in reagent…

ANALYTIK has announced a workshop at its new UK premises, in partnership with Agilent Technologies, on portable and handheld molecular spectroscopy. The free-to-attend,…

CRYSTALLISATION studies and screening of polymorphs needs stable sub-ambient temperatures, traditionally provided by ice baths and jacketed reaction vessels. This approach can be…

8. Biobanking is now realistic even in smaller laboratories

AUTOMATED sample management has often been thought of as the preserve of the larger better-equipped laboratory, but TTP Labtech says this is no longer the case. Its new,…

10. Quantitative detection of carbonyl sulphide in the field

A NEW ultra-sensitive gas analyser which measures ambient air for carbonyl sulphide (OCS or COS), with simultaneous measurement of carbon monoxide (CO), carbon…