THIS is one of those stories that makes you check the date on the press release, just in case it’s a spoof. As unlikely as it seems, though, this one is real: CERN, the European central laboratory for particle physics, the home of the Large Hadron Collider and the place where the very fabric of matter is ripped apart in a search for clues to the most fundamental questions in science, has appointed a resident dancer.

While hundreds of PhD physicists pore over the output traces of the strange and exotic sub-atomic particles brought briefly into existence by the extraordinary violence of the particle accelerators, Gilles Jobin will be stepping lightly through the helium-cooled superconducting magnets to provide an artistic interpretation of “the relationship between mind and body”.

We’re quite sure, here at Labhomepage, that this will be a significant enhancement to the quality of the science that takes place.

Jobin has been granted a three-month residency at CERN, along with videographer Jaoa Pequenao, who will be on hand to record this contribution to the understanding of the workings on the universe.

Jobin is enthusiastic about the assignment: “to realise that gravity, the major force I am dealing with every day, is the weakest of the four fundamental forces of nature is mind blowing”. He sees many similarities between his work and that of the scientists operating the laboratory: “a choreographer deals with time and space, while CERN scientists deal with movement and space at sub atomic levels… to be in the largest scientific experiment in the world is fascinating and intellectually challenging”.

Perhaps it’s just us, but we think we can detect the signature of slight bafflement in the polite but somewhat tepid welcome given to the project by CERN director general Rolf Heuer: “It will be fascinating to see how Gilles Jobin explores particle physics through dance and movement following creative dialogues with CERN scientists and science”, he said. 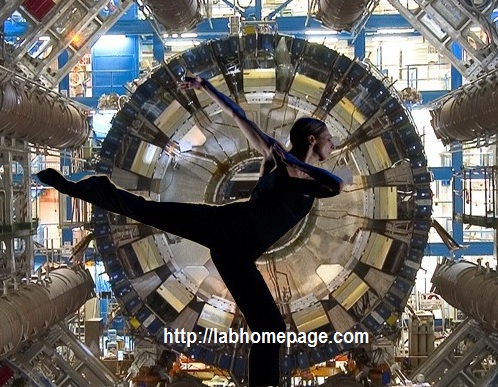 Do the particle dance: what it might look like as the mysteries of the universe are unravelled by the magic of dance at the Large Hadron Collider