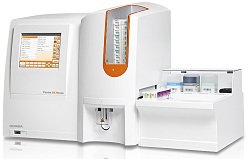 The study, at the haematology laboratory of St-Joseph St-Luc Hospital in Lyon, France, used the Sysmex XE-2100 as a reference to compare functions and ergonomics.

The results, presented in a recent scientific poster, show the instrument’s performance to be “very good” and state that the system offers “significant improvements” over previous generations of Pentra analyser.

In particular, the researchers praised the traceability function and status reports which include reagent and quality control information, the virtual keyboard which was preferred to a physical keyboard, and the multiple USB ports for hardware connections.

The report also approved of the new laser source, which dissipates less heat and reduces both power consumption and noise, and the compact size of the analyser which demands less bench space in the laboratory.