A SECOND automated colony counter from Synbiosis is being used at University College London’s Institute of Child Health (ICH), to assess the effectiveness of novel vaccine candidates. 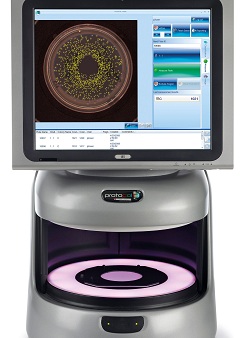 Scientists in the immunobiology unit at UCL are now using a Protocol 3 alongside an older Protocol HR to count colonies of Streptococcus pneumoniae plated on modified Todd-Hewitt agar following an opsonophagocytic-killing assay (OPA).

This is helping the researchers determine the efficacy of new pneumococcal vaccines. With the increase in antibiotic resistance of many bacteria, the production of innovative pneumococcal vaccines is of great interest. Synbiosis says the automation offered by the Protocol 3 increases the speed of data collection and analysis.

Lucy Cowell, laboratory technician in the immunobiology unit at UCL ICH explained: “We routinely use OPA because we are the WHO reference lab for Pneumococcal serology and provide testing for many groups.

“We have been using the Protocol HR for six years, but have recently reached capacity with this system as we now have around 150 post OPA plates to count every day.

“Since each plate has thousands of tiny colonies on it, it is virtually impossible to count them by eye.

“We have been using the Protocol 3 for several months, the system is smaller and its counting performance is faster than the Protocol HR, so it was the right choice to help us increase our throughput.”