THE WORLD’S first precision tunable blue laser operating at 461nm, the Vortex Plus Blue TLB-6802, has been launched by the New Focus division of Newport. This is the critical wavelength for the next generation of atomic clocks currently being built in top research labs worldwide. 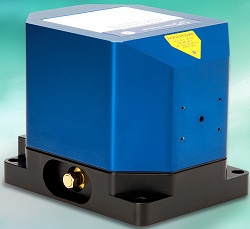 The blue Vortex Plus replaces complex resonant second-harmonic generation, or SHG systems, making it ideal for research applications such as molecular and optical physics and other areas that require blue wavelength tunable lasers, says the company.

The device delivers a narrower linewidth than previous models, combined with same reliability (1% stability over one hour) and true continuous-wave, mode-hop-free operation of the older Vortex II model it supersedes. An  industry-standard SMA port for direct-to-diode, high-speed modulation (useful for precise wavelength locking) is also included.

The TLB-6700-LN laser controller is compatible, featuring low-noise analogue circuits which allow the user precise control of critical operating parameters such as diode temperature and current.