THE DIRECT simultaneous measurement of three isotopes in water and water vapour is now possible in a single instrument, says Los Gatos Research, with its world-first IWA-46EP triple isotope analyser. 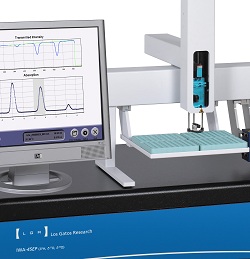 The instrument offers levels of sensitivity and precision comparable to the output of reference isotope ratio mass spectrometer (IRMS) laboratories, says the company, thanks to its proprietary thermal control. This enables measurements to be taken over a wide temperature range, from zero to 45C.

LGR gas analysers are based on Off-axis Integrated Cavity Output Spectroscopy (OA-Icos) technology, a laser absorption technique. This is said to be more rugged and more precise alternatives such as conventional cavity ringdown spectroscopy (CRDS), because it does not need sub-nanometre optical alignment and stability, or a precise thermal control.

The IWA-46EP measures three isotopes – delta-O-17, delta-O-18, and delta-H-2 – simultaneously and directly from samples including seawater and bodily fluids, without the need for expensive consumables or frequent instrument calibration. Applications include atmospheric chemistry, hydrology, and medical diagnostics.

“We have used a Los Gatos isotope analyser to measure O-18 and H-2 ratios from plants and soil” says Tim Griffis, associate professor at the University of Minnesota, USA.  “The ability to simultaneously measure O-17 could add important insights on atmospheric moisture sources since the oxygen-17 excess appears to be sensitive to humidity conditions in the source region.”