A NEW range of chilling incubator which promises vibration-free operation to make it suitable for growing delicate protein crystals has been launched by Torrey Pines Scientific. 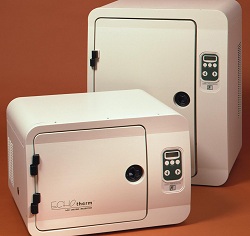 The EchoTherm range consists of four models in two sizes, with capacities of 27.5 and 55.0 litres, which operate on the Peltier method for both heating and cooling. Temperature range is from 4.0 to 70.0C.

Incubators are available with either simple digital or fully programmable controls, and feature proportional integral derivative (PID) temperature control accurate to 0.1C, a digital display, and RS232 for remote operation.

Peltier heating and cooling is a solid state technique which has no need of the compressors and refrigerants typically found in domestic fridges. This lack of moving parts means that Peltier heating and cooling is essentially vibration-free, making it useful in the laboratory for operations such as crystallisation, enzyme reactions and deactivations, storing oocytes, hybridisations, and ligations.