A NEW system which promises to make consistent and reproducible 3D cell culture a simple procedure has been launched by Tap Biosystems. The new Raft system includes a custom microplate and heater together with reagents and a protocol to follow to use the patented process. 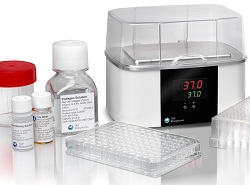 The system is based around a standard 96-well plate, and uses collagen to create an environment for cell culture. The three-step process is described as simply ‘mix, make, and measure’ and is said to offer greatly improved results from 3D cell experiments. Reagents are mixed with the cells of the researcher’s choice, pipetted into the microplate, and incubated on the heater for 30 minutes.

This creates a cell-seeded hydrogel, onto which the Raft plate is placed to absorb the medium. The result is a cell culture built on collagen of physiological strength, for use in secondary screening.

Tap Biosystems reports that the Society for Laboratory Automation and Screening (Slas) has recognised the development as ‘revolutionary’; Raft was launched this week at the Slas conference in San Diego, USA.

← Chromatography vial made for lab automation
Protein incubator is vibration-free →