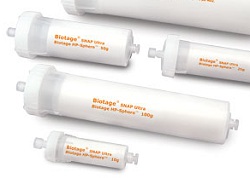 The use of spherical particles instead if the more usual irregular shaped silica fragments is the main reason for the superior performance, says the company.

This enables the researcher to load twice as much sample on one of these cartridges as on a conventional chromatography cartridge of the same size – or in other words, a cartridge of half the size can be used.

Snap Ultra cartridges offer universal plug-and-play via the standard luer connections and, like other products in the Snap range, a removable cap enables samples to be loaded internally.