IN THIS Olympic year the issue of sports doping is high on the agenda, and just this week the London Olympic organisers provided a preview of the anti-doping laboratory in Essex, UK, which will be charged with testing athletes’ urine samples for banned substances (BBC report here). 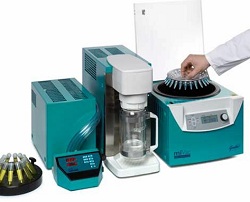 On the other side of the world, the Australian Sports Drug Testing Lab in Sydney has found a way to dramatically reduce its sample preparation time. In a new application report available from Genevac, the company describes how the use of its MiVac Duo sample concentrator has reduced the time needed to prepare samples for liquid chromatography/mass spectrometry (LC/MS) analysis from a few days to just a couple of hours.

LC/MS is rapidly becoming the ‘gold standard’ for the detection of peptide hormones in athletes, fuelled by continuing developments in the application of the technology to proteomics. One major advantage over more conventional immunoassay analysis is that mass spectrometry is able to differentiate between endogenous (naturally-occurring) insulin and synthetic varieties.

Sample preparation for LC/MS to detect synthetic insulin involves sample concentration by evaporation, before analysis can take place. At the Australian government’s National Measurement Institute (NMI) in Sydney, the sports lab (known internationally as the Australian Sports Drug Testing Laboratory, ASDTL) had previously prepared samples by nitrogen blow-down – a process taking several days. However, when the MiVac Duo was used, sample prep for synthetic insulin in serum was completed in just two hours. The lab also reported improvements in recovery volumes and consistency.