A MICROFLUIDIC chip aimed at pathology laboratories promises to ease the tedium of tissue staining by allowing the use of multiple stains on a single biopsy sample. Developed by IBM, better known of course as a microelectronics and computer specialist, the new Microfluidics Probe is the company’s first commercial product in this sector. 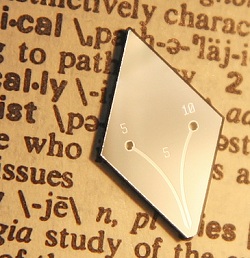 Clinical samples should ideally offer the highest diagnostic capability with the minimum patient discomfort. “The IBM Microfluidics Probe does exactly that”, said Professor Ali Khademhosseini, associate professor at Harvard Medical School and Brigham and Women’s Hospital, USA. “A very small section of a tissue can be stained with virtually any clinically-relevant biomarker, allowing the clinician to do more with a smaller sample and also allowing the use of multiple stains on a single sample, therefore increasing the accuracy of the diagnosis. This may be transformative for diagnosing a variety of ailments from cancer to cardiac disease”.

IBM scientists in Zurich have reported proof-of-concept technology for the probe in the journal Lab on a Chip, published today (13 January 2012). The 8mm-wide, rhumb-shaped silicon substrate carries two microchannels from the tip. The head injects liquid on the surface, then continuously aspirates the liquid to prevent spreading and accumulation on the surface, which can lead to overexposure.

In tissue section analysis, this delivers an antibody precisely to a selected area. By this approach, only a few picolitres of reagent are needed and very little of the specimen is stained, allowing further tests to be performed.

Govind Kaigala, a scientist at IBM Research Zurich, said: “This new approach will enable pathologists to stain tissue samples with micrometre precision, and easily perform multiple tissue stains on limited samples. I hope this puts pathology on a modern roadmap, benefitting from the latest developments in silicon-based microfluidics”.

IBM says it will test and improve the probe and begin using it in laboratory environments in the next several months. Specific clinical applications will be expored, but the high-tech giant has confirmed to the Lab homepage that it plans to license the technology to a partner.

The Zurich team’s paper, ‘Micro-immunohistochemistry using a microfluidic probe’ appears in Lab on a Chip, DOI:10.1039/C2LC21016A.