MICROBIOLOGISTS at the Robert Mondavi Research Institute (RMI), an important food and wine research centre at the University of California, USA, are using a ProtoCol colony counter from Synbiosis in their research on the growth of bacterial pathogens including E Coli O157 and salmonella in food. 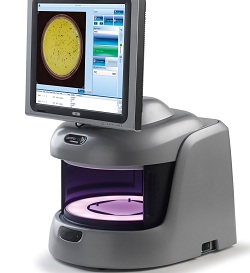 Looking particularly into pathogen growth on nuts including almonds and pistachios, and fresh produce such as lettuce, the researchers monitor bacterial growth in different storage conditions to determine how outbreaks of food poisoning may occur.

“We generate around 250 spiral plates or gridded filters every day, and analysing these manually using a light box and pen would be very time consuming”, said Dr Anne-Laure Moyne, staff research associate at RMI. “We tested two automated colony counters, but found that only the ProtoCol could recognise and count black salmonella colonies when growing on green BSA (bismuth sulphite agar) media. We also saw the ProtoCol could count red colonies on red media, and distinguish grid lines and colonies more accurately”.

Martin Smith of Synbiosis commented: “Research into what triggers bacterial growth is critical. The results RMI microbiologists are seeing, especially using chromogenic media, shows scientists in food microbiology laboratories looking for an accurate automated colony counter that a ProtoCol is an intelligent choice”.