A NOVEL application of 3D printing techniques at nanometre scales could make the creation of custom probes for atomic force microscopy (AFM) both quicker and cheaper, according to researchers at Karlsruhe Institute of Technology. 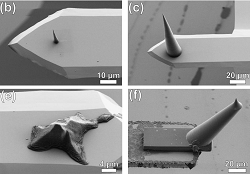 Examples of specialised AFM probes created by the technique, including (lower left) one modelled on the Matterhorn, a mountain in Switzerland

They have developed a technique based on two-photon polymerisation to create bespoke AFM tips via 3D direct laser writing.

3D printing by this method combines detailed structuring and extremely high resolution, they report in the journal Applied Physics Letters.

While 3D printing by various methods has become commonplace at macro scales, the scientists say this development is a breakthrough for nanoscale fabrication.

The process allows freely-designed parts to be precisely ‘written’, even at the extreme scales needed for AFM tips on cantilevers.

Tips with radii as small as 25 nanometres and with arbitrary shapes can be attached to conventionally shaped micromachined cantilevers, according to the report.

This could boost the use of atomic force microscopy in previously tricky applications that demand non-standard probe tips, the researchers say.

“We were able to prove that the resonance spectrum of the probe can be tuned for multi-frequency applications by adding reinforcing structures to the cantilever”, he added.

Atomic force microscopy has been a mainstream technique for extremely high-resolution imaging for decades, and exploits the response of a tiny probe to variations in the topography of a surface.

Specialised probe tips may be needed for specific operations, and this technique could make the fabrication of these AFM tips much cheaper.