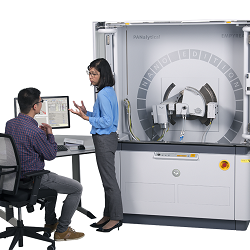 Valuable information about nanoscale structures and dimensions, and about atomic-level order and disorder, can be deduced from the angular scattering intensities, says Panalytical.

This information can be correlated to the material’s behaviour and other properties, supporting the design of advanced new materials with predetermined properties.

Isotropic materials are measured with a 1D (line collimation) setup, while for anisotropic structures such as fibres and polymers the 2D (point collimation) SAXS setup can be selected.

The instrument is based on the same goniometer platform and pre-aligned X-ray modules as Empyrean, Panalytical’s established X-ray diffraction (XRD) device.

The detector on the 2theta arm of the goniometer can be scanned around the sample, enabling wide-angle X-ray scattering (WAXS) data to be acquired up to 78 deg 2theta.

An alternative stationary setup for full 2D WAXS patterns can also be used.

At the opposite extreme, measurements can be extended down to 0.005 deg 2theta (corresponding Bragg spacing 1700nm).

The company says this resolution is almost ten times what can be achieved on a conventional SAXS instrument.