THE RECORD for continuous power output from a terahertz quantum cascade laser has been almost doubled to 230 milliWatts, researchers in China have reported. 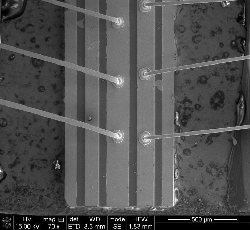 Terahertz wavelengths remain a relatively low-power part of the electromagnetic spectrum, lying between infrared and microwave.

This waveband has interesting imaging potential, being able to penetrate textiles, ceramics, plastics, and wood, but applications have been hampered by difficulty in boosting power.

Now in a report in the journal AIP Advances, Xuemin Wang and other researchers at the China Academy of Engineering Physics outline how the power record for a terahertz laser has almost doubled from 138mW to 230mW.

Their quantum cascade laser (QCL) is made from thin layers of material, allowing the laser wavelength to be tuned.

Terahertz QCLs have previously reached 1Watt output, but only in pulsed wave mode.

Wang said the new laser was powerful enough to be used in air, which is a challenge at low powers because particles absorb and scatter laser light.

This new development could open up new applications in spectroscopy, imaging, and remote sensing.