Eikonix has been appointed to sell the Countstar range of automated cell counters and fluorescence cell analysers in the UK. 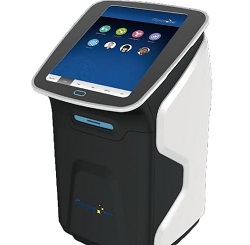 The Countstar Automated Cell Counter is a cell counting and analysing instrument that has been developed on the basis of the classic trypan blue staining technique.

The company says its intelligent image recognition technology make it a leader in its field.

The device can complete an accurate cell count in less than 20 seconds, providing a range of output data including cell concentration and viability, average diameter, average circularity, diameter range, and aggregation of cells in histograms.

All data is saved automatically and can be output in a range of formats.

The system can detect cells as small as 5um and has a 5.2 megapixel optical resolution.

Eikonix will also sell the Countstar Fluorescence Cell Analyser, which uses a range of fluorescence channels combined with a corresponding dye and has pre-loaded protocols and a single click operation produce for rapid results.