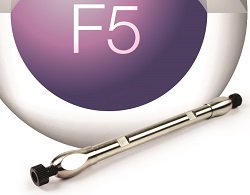 The new Kinetex F5 phase is said to deliver improved reproducibility over other PFP or F5 columns on the market, reducing method development time with its dynamic and responsive chemical functionality.

This is said to be a powerful solution for HPLC/UHPLC (high or ultra-high performance liquid chromatography) development work, with its combination of polar and non-polar interactions including hydrogen bonding, electrostatic, hydrophobic, aromatic and steric/planar mechanisms.

The extra versatility should give chromatographers and other scientists the ability to use reversed phase, 2D-LC, HILIC, SFC or even 100 percent aqueous separation modes.

With its fluorinated groups and carbon ring structure, the Kinetex F5 is described as an excellent choice for both polar and non-polar compound separations as well as challenging methods that include halogenated, conjugated or isomeric compounds.

Kinetex F5 is available in 2.6 and 1.7um particle sizes, with 2.6um F5 claiming performance comparable to sub-2um particles on both standard HPLC and UHPLC systems. The 1.7um column is said to deliver 20 percent greater efficiencies than fully porous sub-2um products.