A NEW array system for low-volume cell-based assays allows scientists to use a fraction of the cells, media, and reagents they have traditionally used, says its developer Curiox Biosystems. 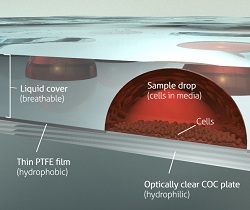 DropArray from Curiox eliminates evaporation, enabling small quantities of cells to be studied

The DropArray system allows high content analysis of adherent or suspension cell systems with low volumes of analyte and consumables, but still provides plenty of valuable data, it says.

Surface treatments available for coating the hydrophilic areas include tissue culture, poly-d-lysine, or collagen. The microplates support assays requiring long-term incubation and multiple washing steps, even when using suspension or weakly adherent cells, says the company. It says DropArray plates are suited to in vitro toxicity assays, and high content screening using scarce or expensive cells, such as hepatocytes, lymphocytes, and stem cells.

Curiox also recently introduced the LT210 (low throughput) and HT200 (high throughput) DropArray washing stations to automate the addition and substitution of media and buffers. A gentle shaking motion washes the plates with a minimal loss of cells and, despite the low velocity action, processing time is said to be comparable to traditional plate washers because the entire plate is treated at once.