TRADITIONAL methods for growing protein crystals are by microplate sitting-drop crystallisation, or hanging-drop methods based on vapour diffusion. These yield a limited number of crystals, but usually enough for biological research. 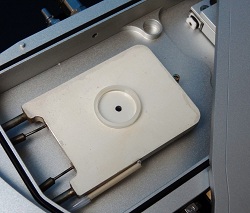 At the Institute for Particle Science and Engineering at the University of Leeds, research fellow Dr Jingjing Liu is using a Linkam LTS350 hot-stage in her experiments to study how protein crystallisation is affected by growing the crystals in a larger quantity, and by changing the cooling rate.

Dr Liu is using HEW lysozyme (hen egg-white lysozyme) to observe the behaviour of protein crystals within a population. To grow a population she uses a quartz crucible inside the LTS350 hot-stage. The number of crystals is proportional to the amount of liquid used within the crucible, and the relatively large capacity of the quartz crucible is a distinct benefit here as Dr Liu can grow the HEW lysozyme crystals in a useful quantity.

A further advantage is that experiments can run for 12 hours or more, which is not feasible with other techniques that are prone to evaporation of the liquid in the crucible. In addition, the whole process of protein crystallisation can be recorded by a time-lapse camera.

Lysozyme forms part of the innate immune system of a number of organisms including mammals, and is significant in the onset and control of disease. Hen egg-white lysozyme is the first enzyme structure to be solved by X-ray diffraction, and first enzyme to be fully sequenced that contains all 20 common amino acids. Lysozyme hydrolyzes the beta-glycosidic linkage between N-acetylmuramic acid and N-acetyl glucosamine in the peptidoglycan of bacterial cell walls. Under a variety of conditions it has a consistent structure, making it ideal for crystallography studies.

Linkam says the stages in the LTS range are well suited to protein crystallisation studies. They consist of a large area temperature-controlled element with a platinum temperature sensor embedded close to the surface for accurate measurements. The LTS350 has now been superseded by the LTS420, which has an expanded temperature range of -196 to +420C.