NEW RESEARCH in France has shown that that both the adhesion of a bacterium to a surface, and its motion on that surface ,are driven by the same mechanism. 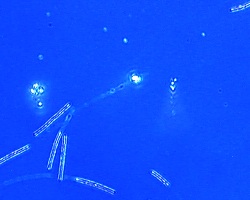 The work, carried out by groups belonging to Inserm and CNRS at Aix-Marseilles University, result from collaborative work with Nanolane, which has devised a new generation of advanced microscope slides called Surfs specifically for this type of investigation.

It was understood that the motion of a bacterium on a surface was connected to the projection of a polymeric material (‘slime’) produced by the bacterium. This latest work, recently published in the US Proceedings of the National Academy of Sciences, shows that the slime is generated at locations spread along the bacterium’s body, rather than only at the rear as had been believed.

The slime appears to play two roles: it works as a glue, and it facilitates motion by lubricating the surface-to-bacterium contact.

Credit for the breakthrough is said to be at least partly due to the quality of the images produced by the SEEC microscope using Surf slides instead of ordinary microscope slides. Nanolane says Surfs have the power to enable a reflected light microscope to resolve samples in an aqueous medium with a sensitivity level of under one nanometre.

The researchers say the bacterial mobility and adhesion discovery adds a fundamental element to what is already known about bacterial motion and will boost understanding of disease and decay mechanisms for which bacteria are responsible.