THE OBIS range of compact laser modules from Coherent has been extended with the addition of devices with outputs at 514nm and 552nm. 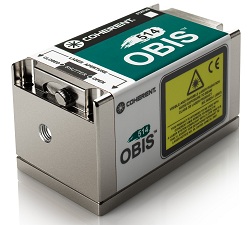 Both deliver laser output power of 20mW, and says the company offer an optimum combination of beam quality, power stability, and low noise).

The Obis range now includes 14 models, each housed in a compact 70x40x38mm housing and with all monitoring and control functions accessible via USB, RS 232, and serial interface ports. Coherent says the interfaces together with its smart integrated controller give these lasers a unique plug-and-play operation which simplifies new applications.

These wavelengths may be useful in laboratory operations including include confocal microscopy, flow cytometry, and drug discovery, with the 514nm Obis 514 LS offering an alternative to ion lasers at this ‘legacy’ wavelength.

The Obis 552 LS is suggested as an alternative to 532nm and 561nm lasers, and excites PE without spilling over into the fluorescein and PE emission bandwidth. The 552nm wavelength will excite most dyes traditionally studied at 561nm, including DsRed and red fluorescent proteins such as dTomato, says the company. Coherent points out that the absorption coefficient of APC and its tandem dyes is low at 552nm, which significantly simplifies the need for crossbeam compensation.