IT STARTED with an idle thought about what might be an appropriate collective noun for mass spectrometers, sparked by the announcement of another two new models from AB Sciex (as reported here). In the same way as we speak of a pride of lions or a parliament of rooks, LabHomepage wondered what would be the word to describe a collection of mass spectrometers. A mass? A momentum? 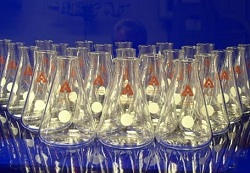 Posing the question on Twitter gave an almost immediate response, and led us in directions we hadn’t planned. David Bradley, who tweets as @sciencebase, suggested an isotomy of mass spectrometers, a made-up word which initially baffled us. It wouldn’t be the last time this particular quest led to bafflement.

Sciencebase then asked us what would be a term for gene sequencers. Gene genies? Gene gnomes? Before we knew what was happening, a new hashtag had appeared (#labkitcollectivenouns) and dozens of contributions poured in from around the globe.

These ranged from the poetic (a coven of ovens) to the obscure (a poche of spatulas) to the downright clever (a muppet of beakers).

What follows, then, is our definitive (for the time being) list of collective nouns for items of laboratory equipment. Feel free to contribute further definitions! Our thanks to Dan Lord (?@photovoltage), Ian Strutt ?(@ianstrutt), Andrea McGhee ?(@AndreaMcGhee), David Bradley ?(@sciencebase), Cain (?@simplecoffee), and Tim Lihoreau ?(@TimLihoreau) for joining in (our own Twitter feed is @labhomepage, and our Facebook page is facebook.com/labhomepage).

A conglomerate of antibodies

A sashay or sachet of assays

A muppet of beakers

A scorch of Bunsen burners

A gymnasium of calorimeters

A Parthenon of chromatography columns

A fog of cloud chambers

A cast or rantallion of Falcon tubes

A choke of fume cupboards

A scintillation of Geiger counters

A duplicant or gene genie or gene gnome of gene sequencers

A scattering of HPLC machines

A quiver or pole of magnetic stirrers

A mass or momentum or isotomy of mass spectrometers

A glacier of microscope slides

A resonance of NMR machines

A multiplet of NMR tubes

A coven of ovens

A peep of pipettes

A shower of pipette tips

A dexterity of purple nitrile gloves

A synthese of reaction flasks

A riposte of retorts

A Mercury of round-bottomed flasks

A gaggle or sight of safety goggles

An earthquake or Richter of shakers

A poche of spatulas

A rainbow of spectrometers

A flux of spectrophotometers

A colony of suba seals

An LB (short for Louise Brown) of test tubes

A regatta of weighing boats

A Vision(On) of white coats

← New wavelengths for plug-and-play lasers
Weekly news: a muppet of beakers and a skittle of Erlenmeyers →