A NEW programme to bring a novel microfluidic DNA-based testing and diagnostics technology to point-of-care settings has been launched by a consortium of LingVitae, Plarion, and KTH Royal Institute of Technology. 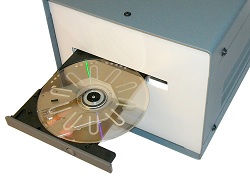 The technology, called Discipher, exploits ‘centrifugal microfluidics’. Based on a DVD disk etched with microfluidic channels, this promises a very low cost way of handling, processing, and analysing samples. Existing optical disk drive technology is used to accelerate fluids through the channels, while temperature is controlled within the drive. The assay in a Discipher system is a self-contained disposable disc of the same dimensions as a DVD or CD, while the drive is a low-cost unit with a target price of US$300-500.

Developed by UK-based Plarion and Scandinavian life science company LingVitae, Discipher has been supported by the Seventh Research Framework Programme of the European Union (FP7).

Now the companies are releasing prototype versions of Discipher instrument to researchers at KTH, and supporting further development of the technology by customising the assay discs.

In December 2011, the companies released the Developer’s Tool Kit (DTK) version of the instrument, and announced they were looking for partnerships with assay developers and owners of complementary technologies, to expand the platform’s capabilities.

“Our aim with Discipher is to democratise molecular and cellular analysis, putting low-cost tools in the hands of the wider community, outside of core laboratories”, said Dr Jackie Cole, head of marketing for Plarion.

“Discipher addresses an unmet need, bringing DNA based diagnostics and testing to users who have not previously had access to this technology,” added Professor Joakim Lundeberg at the Science for Life Laboratory of KTH (Kungliga Tekniska högskolan – or Royal Institute of Technology) in Stockholm.