THE EUROPEAN Union’s Cosmetics Directive has effectively banned the use of animals for toxicity testing of cosmetic products and ingredients, coming into force in March 2009. However certain exceptions covering repeated-dose toxicity, reproductive toxicity, and toxicokinetics have meant that some tests can still be conducted up until 11 March 2013. At that date, regardless of the availability of alternatives, all cosmetic testing on animals is forbidden. 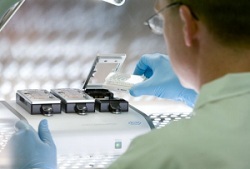 Roche reports today that its xCelligence cellular monitoring system is being used in the EU’s Safety Evaluation Ultimately Replacing Animal Testing (Seurat) initiative, which is seeking new alternatives to the banned in-vivo tests.

The company says that it is not yet possible to completely replace animal testing, especially when assessing the effects of repeated doses over time. The Seurat project aims to change that. A team including Paul Jennings at Innsbruck Medical University, Austria, with Alex Seiler and Manfred Watzele at Roche Penzberg, Germany, has used continuous real-time impedance measurements with xCelligence to investigate renal epithelial monolayer formation and barrier function.

To test repeated dose effects, a human renal proximal tubule cell line was cultured and cell impedance monitored over several weeks to investigate the effect of nephrotoxin. Findings showed that the three different nephrotoxins initially increased impedance values as epithelial cell morphology was altered, followed by a decrease in impedance due to cell death.

xCelligence was shown to effective for monitoring repeated doses on epithelial cell function and cytotoxicity. Unlike the transepithelial electrical resistance (TEER) assay, this is a simple, non-invasive in vitro assay with high temporal resolution. Roche concludes that assays such as this show the way forward in the replacement of animal testing for long-term repeat dose regimes.