THE RECORDING of high-speed events has become something of a competition in recent years, as different equipment manufacturers vie for ever faster video frame rates with which to film transient phenomena. 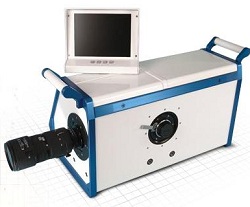 A billion frames per second, and temperature measurement too: the SIM camera

Now Specialised Imaging is taking the chase in a new direction, with the ability to measure precise temperatures at different points in an event.

Its SIM ultra-fast framing camera can capture up to 32 images at one billion frames per second. The new capability being developed for this instrument is to use twin optical channels to capture images at different wavelengths in order to measure temperature.

Each channel is fitted with a wavelength filters (400nm and 900nm), and the images generated are combined by software to give a precise temperature reading at selected points during the high-speed event under study.

Up to 16 optical channels are available, due to the optical design of the SIM camera, and Specialised Imaging says images suffer no shading effects as would be the case with conventional ultra-fast framing cameras. Spatial resolution greater than 50 line pairs per mm (>50lp/mm) is constant in both axes and from frame to frame, the company says. Ultra-high resolution CCD detectors promise precise control of gain and exposure, and an integral TFT monitor allows users to ‘see what the camera sees’ in real-time.