PURPLE Moor Grass, Molinia caerulea, is a common plant in northern Europe and is of scientific interest for the ratios of carbon and nitrogen in contains. The analysis of the material is itself straightforward, but preparing samples for analysis has proven to be something of a problem. 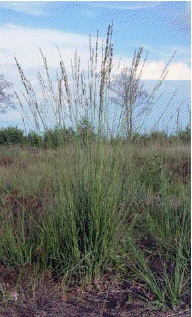 As Fritsch’s application consultant Wieland Hopfe, a certified chemist, explained to the LabHomepage, analysis demands that the dried grass be comminuted to particles smaller than 0.2mm. The first attempt, using a Pulverisette 14 and a 0.2mm sieve, proved unsatisfactory. Visual inspection showed that several complete blades of grass remained intact.

It was apparent that air currents generated within the mill had pushed the grass blades lengthwise through the sieve, and even with a smaller sieve size the results were poor.

The next attempt used a beater blade in the sample preparation mill, intended to break down long fibrous particles such as grass. Using this with a 1mm sieve seemed to give a better result. However when the 0.08mm sieve was applied, it was clear that oblong particles were still being created. These may be adequate for classic analysis, but carbon/nitrogen analysis demands just a small sample of greater fineness and uniformity. 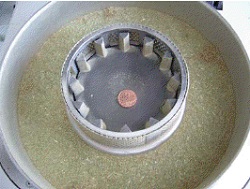 The answer was found with the Pulverisette 7 planetary micro mill. When preparing tough, elastic materials for analysis, sintered corundum bowls and balls are the recommended fittings – but in this case it was found that bowls and balls made of hardened steel were better.

For the first test, the base sample (not additionally comminuted), was added into the sintered corundum bowl and milled for 20 minutes, after which the grass had been ground to a homogenous fine powder. In later tests with the Pulverisette 7, pre-crushed material was added and the steel grinding set used. After ten minutes the grass was ground to a fine powder, 20mg of which can be safely considered to be a representative sample for analysis.