A THIRD-generation automated sample storage system specifically designed for the storage of sensitive biological samples at ultra-low temperatures has been launched by Hamilton Storage Technologies. The BiOS store can cope with anything from 250,000 to ten million sample tubes stored at temperatures as low as -85C. 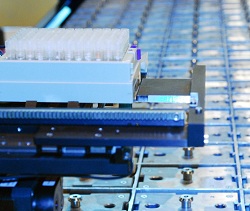 Hamilton says that many existing biological sample stores leave their precious contents at risk. “In conventional biostores, warming events will affect sample integrity”, says Matt Hamilton, vice president of the company. “Removing uncertainty over storage conditions and the chain-of-custody means data obtained from samples will be accurate and reliable”.

BiOS stores samples at -85C in chest freezer compartments, which should improve temperature stability, while procedures such as sample picking are carefully coordinated to maintain ultra-low temperatures at all times. The store is compatible with many types of labware and can cope with multiple types at the same time.

1D and 2D barcodes are recorded as part of the sample tracking procedures which provide the all-important chain-of-custody documentation. This is vital for forensic reports as well as regulatory requirements such as 21 CFR Part 11.

Multiple redundancy of back-up systems is designed to preserve sample temperatures even in emergencies..

Hamilton says it has already received orders for the system, including a biobank specialising in diabetes in Saudi Arabia, and two applications in the Netherlands – one for crime scene sample storage for the Netherlands Forensic Institute, and one for a multi-generational population study called LifeLines.