NORTH American researchers can now get their hands on the Olympus LV200 benchtop microscope, which has already been available to those in Europe and Japan. 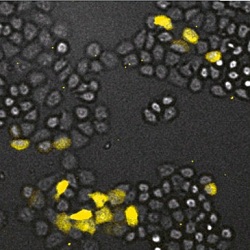 The LV200 is designed to acquire very low-light bioluminescence images and, when used with the latest luminescence probes, can provide sub-second imaging with what Olympus says is exceptional clarity and brilliance.

Fluorescence is a widely used technique in modern microscopy, and luminescence has some similarities to this technique. However, it relies on a chemical reaction occurring within the specimen rather than having cells labelled with probes to absorb excitation light a specific wavelength and emit it at another.

Bioluminescence occurs in a living cell when an enzyme (luciferase) reacts with a substrate (luciferin or another enzyme-specific substrate) to create light.

Imaging cells by luminescence offers some key advantages. There are no phototoxicity issues which can arise with repeated exposure of living cells or tissues to fluorescence excitation, and bioluminescence imaging typically does not suffer from unwanted background signal.

This is a major advantage when imaging samples with high native background fluorescence such as plants and some mammal tissues.

Because no excitation light is required for luminescence imaging, photobleaching is not an issue.

Despite these advantages, applications for luminescence in live cell imaging have been limited until now, primarily because luminescence is much dimmer than fluorescence.

Luminescence has been used in a variety of ways, including bioluminescence resonance energy transfer (BRET) assays, in which the signal from thousands (or millions) of cells is collected and quantified.

The benchtop microscope includes a built-in live-cell incubator and a light-tight casing that prevents ambient light from interfering with imaging.

Together, these design elements allow researchers to acquire much brighter luminescence images using much shorter exposure times, says the company.

Together with brighter luciferases, such as Promega’s recently launched NanoLuc luciferase, the LV200 makes it possible to use bioluminescence for a far wider range of experiments than was ever possible before.