SCIENTISTS in Canada and the USA have used 3D imaging techniques to settle a long-standing debate about how DNA and structural proteins are packaged into chromatin fibres. A paper published in Embo Reports shows that the mouse genome consists of 10nm chromatin fibres, but significantly did found no evidence for the wider 30nm fibres that had been thought to be important components of the DNA architecture. 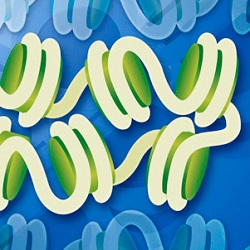 “DNA is an exceptionally long molecule that can reach several metres in length. This means it needs to be packaged into a highly compact state to fit within the limited space of the cell nucleus,” said David Bazett-Jones, senior scientist at the Hospital for Sick Children, Toronto, and professor at the University of Toronto, Canada.

“For the past few decades, scientists have favoured structural models for chromatin organisation where DNA is first wrapped around proteins in nucleosomes. In one possible model, the strand of repeating nucleosomes is wrapped further into a higher-order thick 30nm fibre. In a second model, the 30nm fibre is not required to compact the DNA. Differences between these models have implications for the way the cell regulates the transcription of genes.”

Chromatin is the complex of DNA and proteins that is the fundamental constituent of chromosomes in the nucleus of the cell. The researchers used a combination of state-of-the-art imaging techniques, in this case energy spectroscopic imaging and electron tomography, to generate high-resolution three-dimensional images of chromatin in mouse cells. This approach allows for visual analysis of chromatin fibres without the need to add chemical agents to improve the contrast of images.

“Our results revealed that the 30nm chromatin fibre model is not consistent with the structure we found in our 3D spectroscopic images,” said Bazett-Jones.

“It was previously thought that the transition between thinner and thicker fibres represented a change from an active to repressed state of chromatin. However, our inability to detect 30nm fibres in the mouse genome leads us to conclude that the transcriptional machinery has widespread access to the DNA packaged into chromatin fibres.”

The results are consistent with recent studies of the human genome which suggest that approximately 80 percent of the genome contains elements that are linked to biological function. Access to enhancers, promoters and other regulatory sequences on such a wide region of the genome means that all of these sites must be accessible. The 10nm model of chromatin fibres provides sufficient access to DNA to allow potential target sites to be reached. The 30nm model would not accommodate such widespread access.

The researchers offer several reasons for the observation of wider fibres in earlier studies. In some cases, the conditions outside of the cell, including those used in earlier studies where chromatin was extracted from the cell, may have given rise to structural artefacts. For some of the earlier spectroscopic studies, it may even be a question of poor resolution of existing 10nm fibres.