Biomolecular binding events were monitored with a lateral resolution near the optical diffraction limit at an acquisition rate of about 1Hz with a sensitivity in terms of surface coverage of 1ng/cm2. 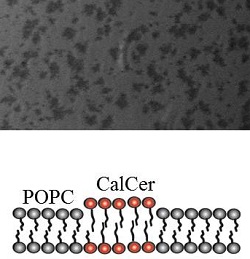 The potential of the technique to discriminate local differences in protein binding kinetics as well as its compatibility with microfluidic devices was demonstrated by time-resolved imaging of anti-GalCer antibodies binding to phase-separated lipid bilayers consisting of phosphatidylcholine (POPC) fluidic phase and galactosylceramide (GalCer) gel phase.

By operating SEEC microscopy on an inverted optical microscope equipped with a TIRF illuminator, study leader Fredrik Höök and his colleagues have modified the illumination conditions to be closer to the optimal lighting conditions (annular aperture instead of a conic one).

This leads to diffraction-limited images with a high contrast and thus, a clear distinction between the two lipid phases despite their being of comparable thickness (the gel phase being only about 1nm thicker higher than the surrounding fluid phase).

SEEC microscopy is based on the use of a new generation of microscope slide, known as the Surf slide. These substrates make possible to directly image samples/structures with nanoscale thickness through an inverted or an upright reflected light microscope with standard illumination techniques.

SEEC microscopy has been employed for the characterisation of DNA and peptide microarrays as well as to quantify protein binding to microarrays.

SEEC microscopy offers the potential to provide key contributions to the investigation of small-scale structural heterogeneity in a variety of biological systems including cell membranes. Future studies will involve combining SEEC microscopy with fluorescence analysis (including Frap, Fret, etc) to gain novel insight into hot topics such as biological films, cell attachment, and focal adhesion as well as label-free studies of virus or nanoparticle adsorption to biological interfaces.