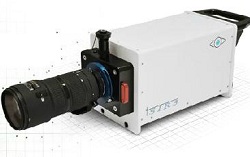 In either arrangement, it is the advanced trigger mechanism that is credited with imaging success. New trigger hardware improves the reliability of images capture when dealing with unpredictable high-speed objects, and allows use of a narrower field of view to effectively increase the resolution on imaged objects.

Sir3 features an optical viewfinder to ease image focus and framing, while maintaining the facility for electronic focusing using an external TFT monitor and focus button. A Nikon F-mount is included as standard, with a manual aperture adjuster allowing lenses that lack manual aperture control to be used.