A LOW temperature bath that provides metallurgists and testing laboratories with precise temperature control when cooling specimens for impact testing has been launched by SP Scientific. 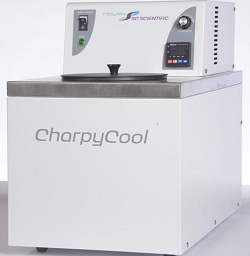 The new CharpyCool has one of the smallest footprints on the market, the company says, and is completely self-contained. Unlike some cooling baths that require a supply of costly consumables such as liquid nitrogen or dry ice, CharpyCool is mechanically refrigerated.

Its internal working volume of eight litres allows up to 91 Charpy impact test specimens to be held at temperatures between -80C and +30C.

A variable speed magnetic stirrer and vortex breaker provide temperature uniformity, while PID control enables the CharpyCool to sustain precise temperature control to within +/-0.1C. Temperature can be monitored on the inbuilt digital display.

SP Scientific says CharpyCool exceeds the strict temperature stability requirements of the American Society for Testing & Materials (ASTM) Method E23 for charpy impact testing – a standardised high strain-rate test, most often used on metals, polymers, ceramics, and composites to determine the energy absorbed during fracture. This absorbed energy is a measure of a given material’s toughness, and acts as a tool to study temperature-dependent ductile-brittle transition.