TURNAROUND time and batch-to-batch efficiency have been improved at Phosphonics, while scaling-up production of its range of functionalised silicas, using a specially adapted Asynt 20litre ReactoMate reactor system. 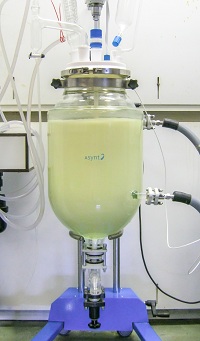 Phosphonics, based in Abingdon, UK, has developed a range of functionalised silicas for pharmaceutical purification and heterogeneous catalysis operations.

The materials, made using a proprietary immobilisation technology, enable metal residue levels in drug substances (APIs) to be reduced to very low, regulated levels and precious metals to be effectively scavenged from spent catalysis reactions.

“Traditionally our scientists relied upon five-litre heating mantles to scale-up production of our functionalised silicas from tens of grams to initial kilo quantities. However this technology suffered in terms of the initial scale-up speed we desired.

“Implementing the Asynt ReactoMate system has given us the benefits of greater comparison to pilot scale chemistry, better heat and mass transfer, and far greater control than heating mantles. The unique stand that the ReactoMate reactor sits on allows for complete access to the filter port and the adjustable height allows us to filter our solids with far greater control (under gravity) than by lifting and pouring from large round bottomed flasks” observed Michael Suggate, laboratory production manager at Phosphonics.