GENEVAC says that, whether working in drug discovery, flavour and fragrance research, organic LED synthesis, or academic research, its systems are the ideal tool for evaporating multiple samples in parallel. 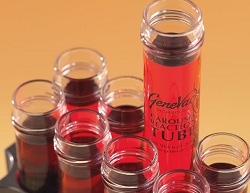 Genevac evaporators are proven in a wide range of parallel chemistry applications including removal of reaction solvents between stages of a multi-step synthesis and removal of strong acids of bases when changing salt forms.

The company has developed a special option for its EZ-2 and HT Series II evaporator that provides a high level of resistance to acidic materials including trifluoracetic acid, concentrated hydrochloric acid and concentrated nitric acid.

Developed to enable a large volume to be dried directly into a small storage container, SampleGenie technology eliminates the need to reformat samples from a flask into a vial.

Depending on the number and nature of the samples the laboratory is tasked with handling then one of several Genevac systems may be suitable. The EZ-2 and HT Series II evaporators are designed for working with smaller samples in plates, tubes and vials. When working with large volume samples in flasks the Rocket evaporator is the most suitable, productively concentrating or drying up to six 450ml flasks or 18 ASE tubes in parallel.

← Inverted microscope range has been re-engineered
Weekly news: beam me up, Geordie →