THE 2011 Olympus BioScapes digital imaging competition has been won by an image of a rotifer, a microscopic aquatic creature, bearing a comic resemblance to a cartoon mouse. Taken by Charles Krebs using high-speed flash to freeze the motion of the animal’s cilia, the image also shows the tubular home the creature has built for itself. 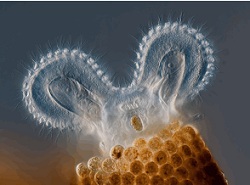 Captured using differential interference contrast illumination, the winning image was selected from more than 2000 entries to earn Krebs, of Washington state, USA, $5000-worth of Olympus equipment.

Olympus BioScapes has now been running for eight years, celebrating still images and movies of life science subjects for their scientific value, aesthetic appeal, and technical competence. Winning entries this year reflect advances in neuroscience and cell biology, along with amazing glimpses of the unseen microscopic world.

Third place was won by Liang Gao of the Howard Hughes Medical Institute,USA, with a four-channel video of COS-7 cells, derived from African green monkey kidney cells. Another movie that caught the judges’ eyes was a 3D fly-through of a mouse brain, created from over 10,000 individual fluorescence images using microscopy and array tomography. This earned Stephen Smith of Stanford University, USA, the Judges’ Special Award for Technical Merit.

“BioScapes images and movies remind us that our world is endlessly beautiful and fascinating,” said Hidenao Tsuchiya, group vice president at Olympus America. “They also open a window to some of the most important and compelling research going on in laboratories around the world”. A selection of entries will be displayed in a US museum tour, and will be shown internationally next year.

3rd: Liang Gao, still from movie of COS-7 cells