A UNIVERSITY spin-off has attracted substantial funding to launch its organs-on-a-chip microfluidic devices. 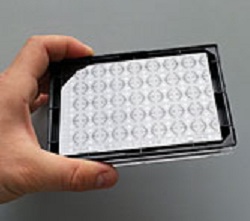 A prototype of the Mimetas 3D organ-on-a-chip plate

Mimetas, a spin-off of the University of Leiden, Netherlands, has attracted funding of 200,000 euros to puts its synthetic organs into production. The company expects the devices to attract interest from drug development programmes, bridging the gap between traditional laboratory tests and clinical testing in patients.

“These organs-on-a-chip can be used to determine the efficacy and toxic side-effects of new medicines”, explains researcher and co-founder Paul Vulto. “They have the potential to revolutionise therapeutic drug development and save many laboratory animals”.

The company thinks its products will ultimately be used to select the best therapy for individual patients, so-called personalised medicine.

The Dutch Foundation for Applied Sciences (STW) has awarded Mimetas a subsidy of 200,000 to bring the ‘organs-on-a-chip’ to market.

← Weekly news: if it quarks like a duck…
DNA sequencing kits for use with Ion Torrent →