NEWPORT’s newly designed 1830-R optical meter is a ‘drop-in’ replacement for the 1830-C power meter, which is widely used in fibre optic production and testing. 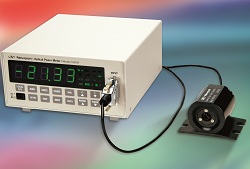 DC power measurements in units of W, dBm, or dB are displayed on the 4½ digit backlit LED display. The dynamic range of the meter covers 11 orders of magnitude, with sensitivity down to 10pW and full scale readings up to 2W, depending on the detector used. The unit has an audible beeping tone which changes frequency as a function of incident optical power, which Newport says is useful when optimising the alignment of an optical beam.

Newport says its 1830-R is CE- and RoHS-compliant, and available now. Each unit comes with software and documents included on a USB memory stick.

← The right light for microscopy
40th birthday for Cherwell Labs →