WE’RE not quite sure what the collective noun is for mass spectrometers, but we’re pretty sure they could use one down at AB Sciex’s headquarters. Coming hard on the heels of recent announcements of new ‘workhorse’ instruments the 4500 and 4600, the company has just launched two further mass spectrometers including the second-generation 5600 and a top-of-the-range 6500. As if that wasn’t enough, it has announced a new series reagents that it says will enhance the sensitivity of mass spec  analysis.

The second generation TripleTof 5600+ mass spectrometry system is described as marking an advance in accurate mass technology, combining high resolution with sensitivity and speed. Taking on the mantle of the 5600, launched just two years ago, the new instrument has been tweaked to maximise the potential of the novel ‘Swath’ (Sequential Window Acquisition of all Theoretical fragment-ion spectra) technique (see Labhomepage report here). The 5600+ also comes with software to support compliance with the US FDA’s 21 CFR Part 11 regulations, making it useful in regulated pharmaceutical industry laboratories. 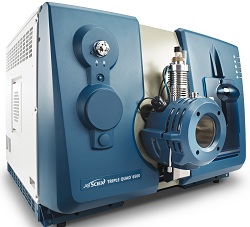 Its new big brothers are the Triple Quad 6500 and Qtrap 6500, which AB Sciex says are next-generation mass spectrometers with up to ten times the sensitivity of a certain triple quadrupole mass spec available today. “These new instruments”, it says, “are designed for scientists who need to push the limits in quantitation in complex matrices while maintaining reproducibility and robustness”.

The greater sensitivity of the instruments is attributed to improvements in the IonDrive Turbo V ionisation source, along with enhancements in the ion transmission stage with the IonDrive QJet guide, and a twenty-fold increase in detector dynamic range.

“The most critical factors in mass spectrometry are sensitivity and selectivity”, said Fabio Garofolo, vice president of bioanalytical services at Algorithme Pharma. “My team ran samples on the new AB Sciex 6500, and we were pleased by the high quality of the data, particularly in the bioanalysis of large therapeutic peptides and proteins”.

Alongside these new instruments, AB Sciex has launched new reagents which it says can boost performance, improve data, and increase sensitivity in mass spectrometry.

The company says that mass spectrometry sensitivity can be reduced by matrix suppression, high background noise, poor ionisation, or poor compound fragmentation. Amplifex reagents are the only derivatising agents which are custom designed, synthesised, and tested to boost ionisation efficiency, improve fragmentation and chromatographic properties, and overcome other workflow restraints that laboratories can face, including minimal available sample volumes, it adds.

All of which leads us to wonder, just what would be a good collective noun for mass spectrometers? Our best idea so far is a ‘momentum’. Your suggestions are very welcome.