RESEARCHERS at a leading US biopharma company have concluded that the Ambr micro bioreactor is a realistic scale-down model for conventional two-litre bioreactors, reports Tap Biosystems. 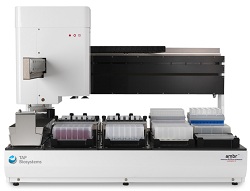 Writing in the journal Cytotechnology, the scientists recounted their trials to replicate the characteristics of bioreactors at the micro scale. A 2l bioreactor, shake flasks, and the Ambr system were compared using with four recombinant Chinese Hamster Ovary (CHO) cell lines expressing antibodies.

Their results showed that cultures grown in Ambr (which stands for Advanced Micro BioReactor) performed much like those in the conventional small bioreactor. Cultures grown in shake flasks, however, did not compare well.

This paper also indicates that Ambr reduced manual input by automating some liquid handling and sampling operations. This increased the throughput and efficiency of their work, say the researchers,  and saved time.

Dr Barney Zoro, Ambr product manager at Tap Biosystems, commented: “This provides clear evidence that, due to limitations in pH and DO control, shake flasks are a poor model for process scale-up. Ambr is shown to be both easier and more time efficient for clone selection and scalable process development.”

← Sample tubes are big inside, small outside
The ultimate scientist’s business card? →