A RESEARCH project looking into microtubules in yeast cells has produced ‘stunning’ results, which could change our understanding of cellular misregulation disorders including Down’s, lissencephaly, and some cancers.

The team, working at the University of Leicester, UK, has identified for the first time how the internal architecture of a cell changes during the formation of gametes. Dr Kayoko Tanaka’s research, the result of a BBSRC New Investigator award, is published in the journal Current Biology. 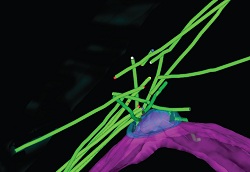 In this 3D model of rMTOC, the microtubules are green and the nuclear envelope is magenta. In the wild cells, many microtubules emanate from just above the spindle pole body (SPB), blue

Looking deep into yeast cells, the researchers deciphered the precise structure of the microtubules, and identified the protein responsible for creating the structure. They found that the protein requires regulation to complete gamete formation, and that regulation failure produce gametes with the wrong number of chromosomes.

This is the sort of chromosomal abnormality that, in humans, contributes to disorders such as Down’s Syndrome.

Using high-powered fluorescent and confocal microscopes at Leicester, and electron microscopes at the European Molecular Biology Laboratory Heidelberg, Dr Tanaka and her team were able to reconstruct the arrangement of microtubules in a yeast cell undergoing gamete formation.

Commenting on the findings, Dr Tanaka said: “Microtubules have attracted much attention because they are such a fundamental structure in the cell to direct numbers of dynamic cellular activities. They play an essential role in chromosome segregation during gamete formation. In the cell without Hrs1/Mcp6 protein, the whole rMTOC structure is missing.

“When cells form gametes or various neuronal cells, microtubule reorganisation occurs to help the transition. For the first time, we could take a very close look at the microtubule arrangement in yeast cells undergoing sexual differentiation using EM tomography”

Collaborating with the Biological Mass Spectrometry Facility led by Dr Duncan Smith at the Paterson Institute for Cancer Research in Manchester, UK, the team also investigated Hrs1/Mcp6, a protein responsible for the development of the rMTOC structure.

This showed that the dynamic microtubule rearrangement involves transient generation of the rMTOC, which is later subjected to rigorous down-regulation. Because As Hrs1/Mcp6 is believed to have mammalian counterparts, the researchers think this paradigm of rigorously controlled, transient, specialised structures to organise micorutuble architecture may be conserved across species.