ANY MICROPLATE sealing film presents an obvious risk of allowing the adhesive to come into contact with the sample. JG Finneran says its new 96-Well PTFE Sealing Film features a patented design to seal samples into microplates without exposing them to the sealing adhesive. 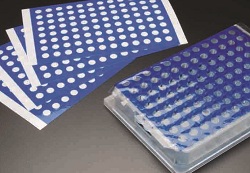 Samples in high throughput bioanalytical studies are protected against cross contamination or evaporation by use of the film, which is coated with a solvent-free adhesive.

That adhesive is applied in a precise pattern to seal around each of the 96 wells, leaving the area over the sample well free of adhesive.

The company says that this design prevents adhesive from fouling the pipette tip or sampling probe, and ultimately minimises the amount of adhesive that comes into contact with a sample.

The adhesive is formulated to adhere to microplates made of polypropylene, polystyrene, and polycarbonate.

The inert PTFE film material is compatible with aqueous solutions and organic solvents, and is resistant to most laboratory chemicals including dimethyl sulphoxide (DMSO). It has a functional temperature range of -80C to +120C.