AN EASY, flexible, and non-biased method to generate directional single, paired-end, and multiplexed libraries from mRNA- or rRNA-depleted total RNA is promised by Bioo Scientific for its NextFlex kits. 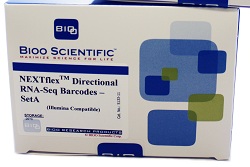 Bi-directional sequencing, in both the 5′-3′ and the 3’5′ directions, means that the NextFlex directional RNA-seq kit provides thorough and even coverage of long RNAs, says the company.

The kits fragment mRNA (or rRNA-depleted RNA) using a cationic buffer. This fragmented RNA is dephosphorylated, followed by a kinase treatment which adds a 5′ phosphate.

Fragmented RNA now containing 5′ phosphate and 3′ hydroxyl groups are then ligated to randomised 3′ and 5′ adapters, followed by first strand synthesis and amplification.

Bi-directional sequencing can be performed on the same sample by using barcodes to differentiate the different reads.

While ligation based adapter addition is a hallmark of most NGS library preparations, it is well known that ligases can introduce sequence dependent bias, an un-desirable side effect.

Bioo Scientific says its randomisation technology incoproates mixed bases at the ends of the adapter, eliminating ligase preference and its resulting bias.