A STUDY into bird hybridisation at Uppsala University, Sweden, has been able to make progress only because of its use of TH60-6 warm stage from Linkam Scientific Instruments, which maintains the temperature of the gametes under observation. 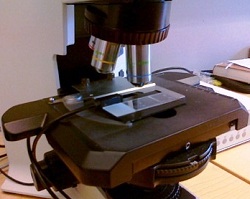 PhD student Murielle Podevin is studying the collared flycatcher and the pied flycatcher – two distinct species which both breed on some islands in the Baltic Sea. The species will sometimes hybridise, producing sterile females and males with greatly reduced reproductive abilities.

Podevin is analysing and comparing the semen of both species and of hybrid males, and video recording the movement of live sperm under the microscope. Because sperm swim more slowly and soon cease all activity at temperatures below 40C, the use of a warm stage is essential. “I need my samples to be at 40C exactly, so that there is no variation. I found the warm stage straightforward to use. The temperature is easy to set and remains stable.”

The aim of the research, at the Evolutionary Biology Centre, Department of Ecology and Genetics/Animal Ecology at Uppsala University, is to learn more about how quickly gametes diverge between species and what mechanisms reduce the costs of hetero-specific mating.

Since hybridisation is not beneficial to either species, it is thought that mechanisms should evolve to boost recognition of their own species. The researchers plan to investigate if the gametes have diverged in the two species, making them less compatible. Such barriers to fertilisation could be the last step in the speciation process. The research project is currently ongoing.